Metaverse Future: How It Can Play Its Role in Future? | Down2You 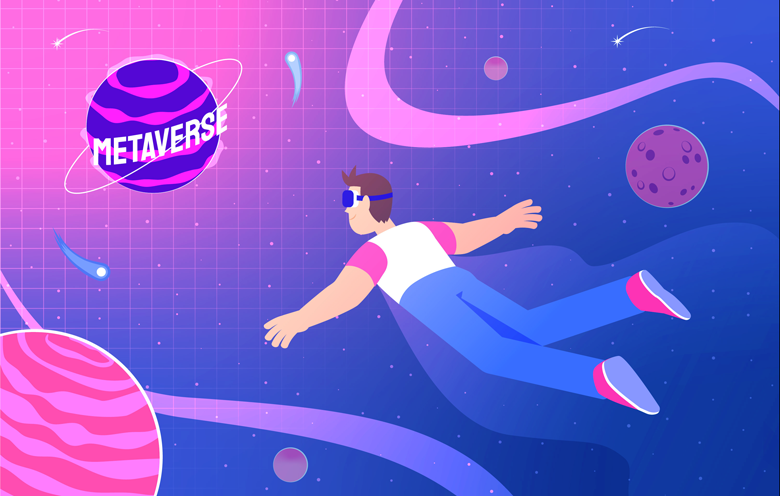 Is Metaverse Going to be Our Future?

Although the term ‘metaverse’ became a buzzword in 2021, it has been around since 1992. It was coined and first used by Neal Stephenson in his science fiction novel Snow Crash. Stephenson created a hyperreal world where humans’ avatars interacted with each other in a digital space modeled after the real world. Modern usage of the term is a bit similar to what Stephenson might have predicted. So what is the hue and cry about? Is it just a myth or is the metaverse truly going to be our future? In this article, we at Down2You look at these and some other important questions about the future of the metaverse.

So what is the hue and cry about? Is it just a myth or is the metaverse truly going to topple the apple cart of the physical world? In this article, we look at these and some other important questions about the future of the metaverse.

Metaverse is an Immersive digital space that allows humans to socialize as avatars. Think of it as living on the internet by being a part of it. It is a virtual world not owned by any single party or person but a shared environment where you can buy and sell land, art pieces, and even clothes with cryptocurrency.

You can understand the concept of metaverse from games like Roblox or Fortnite where avatars interact with others, and each one has an individual sense of presence. Metaverse will enable the rule of the digital, where your online persona is likely to become more important to you than your physical self.

This will be possible due to constantly improving GPUs (Graphic Processing Units), artificial intelligence, photorealistic 3D engines, 5G, and the ever-improving blockchain. One development that will make the metaverse a reality (or a virtual reality if you like) is XR or extended reality.

Extended Reality and the Future of Digital Presence

Extended reality technologies include VR (virtual reality), AR (augmented reality), and BCIs (brain-computer interfaces). These technologies might seem foreign to you and far into the future, but AR and VR headsets are already here, and Neurolink is working on invasive BCIs.

XR headsets are expected to go through a broad consumer adoption, which will result in revolutionizing the human digital presence. Major high profile platforms such as Sony, Microsoft, and Meta (or Facebook) are popularizing headsets, which suggests that they will be users’ ultimate choice to experience interactive, digital environments.

Who are the Major Actors?

Meta (formerly Facebook) might be the most prominent advocate of the metaverse, but it is not the only major actor. Nvidia, a chipmaker company, has set up a service similar to metaverse which they are calling ‘omniverse’. This is a shared online simulation platform that allows creators and designers to collaborate digitally. Gaming companies, as pointed out earlier, have already been pioneering metaverse in the form of online immersive environments.

We might be headed towards a new era of e-commerce, as stores are gearing towards creating and selling e-pparel. Luxury brands like Louis Vuitton, Gucci, and Balenciaga have already begun to sell virtual clothes, bags, and shoes. Meta-malls have also started appearing, which enable you to shop in virtual reality stores for your avatars. People have already started buying famous landmarks or NFT art for their virtual mansions.

How Close are we?

Tech industries face several hurdles in the mainstream adoption of the metaverse. First of all, VR headsets are expensive. Secondly, spending a large time in a parallel, hyperreal world, wearing a headset might have unknown mental and physical repercussions. However, the interest demonstrated by tech giants such as Intel and Meta tells us that we are indeed close.

Metaverse might seem like a theory or a concept right now but the popularity of VR headsets tells you that it isn’t that far. Almost every technological platform, such as Meta and Steam, working on metaverse is creating cyberspace for its VR headsets.

Two alternate visions are expected for the metaverse. One vision is the replication of ‘walled-gardens’, closed and distinct environments controlled and managed by the operator. Another vision is a space shared by everyone, where experience and power both will be decentralized, and users (or ‘metizens’) and content creators would be able to control and monetize the internet.

Regardless of the vision you believe in, the metaverse will change how we work, get educated, or simply, ‘live’. Metaverse will hold virtual meetings where workers would rely on headsets and avatars. VR platforms, such as AltspaceVR, are already allowing shared, community-based experiences. This enables people to get together to witness virtual events, such as weddings.

The Benefits of Metaverse

Decentralizing experience means more power to individuals. If how we work moves to VR, it would empower people in many ways. Multiple generations are already used to working from home in the aftermath of the Covid-19 pandemic. This would enable spatial flexibility too as metaverse would decrease the need for physical workplaces.

Will Metaverse be for Everyone?

Completely relying on a parallel world, which technically doesn’t even exist, might seem overwhelming, unless the meaning of ‘existence’ changes due to a psychological, social shift. The physical world cannot be completely replaced, and to solve this, proponents of the metaverse are predicting a reality that would present a balance between the physical and the digital world.

The metaverse is an immersive virtual environment, which is supposed to alter the way we communicate, live, or work. It has been a part of games for a while now, and possibilities like virtual social events, shopping, and even work are expected shortly.

Although there are disagreements on how the metaverse future could be envisioned. Depending on technological breakthroughs and innovations; the amount of funding and research going into it tells us that, sooner or later, the metaverse will materialize and become an intricate part of our reality. We cannot predict with utmost certainty what it would look like, but we can surely say that it is here and will soon alter the way we communicate, work, or spend time.

future of metaverseis metaverse the futuremetaverse futurethe metaversewhat is metaversewhat is the metaverse
We use cookies on our website to give you the most relevant experience by remembering your preferences and repeat visits. By clicking “Accept”, you consent to the use of ALL the cookies.
Do not sell my personal information.
Cookie SettingsAccept
Manage consent